One of Richard Roy’s backyard beehives produced about 70 pounds of sweet, golden honey last year. Two feet away, bees in a nearly identical stack of purple wooden boxes haven’t produced a drop to spare for their handler in three years.

Roy, a retired high school English teacher who has kept bees at his Colchester home for about seven years, couldn’t figure out why the second hive failed to thrive.

So he called for a bee doctor, and luckily she makes house calls.

In response to environmental, chemical and other threats to pollinating insects, Vermont lawmakers passed a pollinator protection bill in 2019. The law created Decker’s full-time position and aims to protect beneficial insects in several other ways, as well. It required the removal of neonicotinoids, a class of pesticides toxic to bees, from retail shelves. It beefed up disease inspections for hives coming into and leaving the state. And it required that hive owners have an approved plan to fight the dreaded Varroa mite, which has been decimating honeybees for more than a decade.

Roy and other beekeepers worry, however, that the well-intentioned measure failed to close a loophole that allows farmers to continue planting seeds coated with neonicotinoids.

“I think what the bill did was good, but I don’t think it went far enough,” Roy said.

Neonicotinoids, often referred to as neonics, are a class of pesticide modeled on nicotine, a natural insecticide. They were developed in the 1990s to address pesticide resistance in certain families of insects. While they’re less toxic to mammals and birds than other pesticides, they can be deadly to bees. Neonics block a neuron pathway more common in insects than warm-blooded animals. Small doses can kill bees and, research shows, even trace amounts can harm bee health by impairing worker bee navigation and reducing the reproduction rates of queen bees.

The primary pollinator protection tool in Vermont’s 2019 law was the retail ban on neonics. Faced with evidence that homeowners sometimes over-apply such products to their lawns and rose bushes, lawmakers banned their sale to all Vermont residents except professional pesticide applicators. But arborists can and do still spray trees with neonics for gypsy moths and emerald ash borer, and landscapers can still apply them to golf courses and lawns to kill grubs.

In 2019, professionals reported applying 965 pounds of the most common neonic used in Vermont: imidacloprid. By contrast, in 2016 they applied a high of 3,382 pounds. The state has never tracked data on retail sales to homeowners.

There’s another shortcoming in the law, critics say: The vast majority of neonics are introduced into the environment by farmers who plant corn and other seeds pretreated with the pesticide, ensuring that it will spread throughout the plant and its flowers as it grows, according to Ross Conrad, owner of Dancing Bee Gardens in Middlebury.

“They are using it automatically, every year, whether they have an issue or not,” Conrad said. “It’s crazy!”

Conrad, former president of the Vermont Beekeepers Association, was a member of the state’s Pollinator Protection Committee, which in 2017 issued a lengthy report on the threats to honeybees. That report paved the way for the 2019 law.

According to federal pesticide law, products on which a pesticide is used to protect another item, such as a telephone pole treated with creosote, are exempt from registration, explained Cary Giguere, director of public health and resource management for the Agency of Agriculture, Food and Markets.

So when Vermont farmers order neonic-infused seed, they do not have to register the pesticide with the state or report how much they’re using, he said.

“They’re following the letter of the law,” Giguere said.

In 2015, the state estimated that, with 100,000 acres of corn under cultivation and 30,000 treated seeds planted per acre, Vermont farmers were probably using about 8,270 pounds of neonics annually. That number has likely dropped by half since then because the amount of pesticide in each seed has decreased in recent years, but it’s still cause for concern, Giguere said. 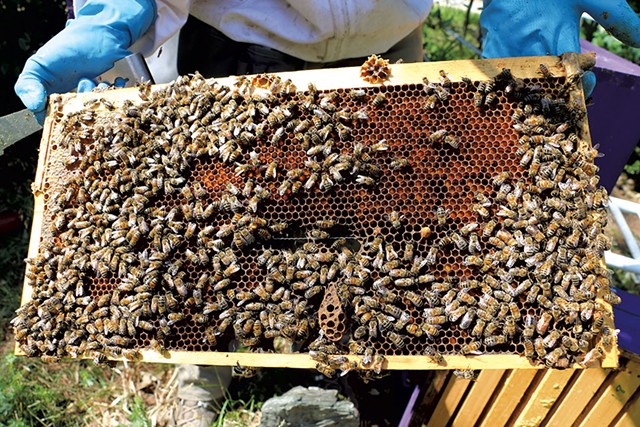 The neonics protect seeds from bugs in the soil and from sucking insects as the plant grows, but the chemicals also can be flushed out of the soil and into waterways after rains. For example, tests have found the pesticide in Jewett Brook in Franklin County, particularly early in the season after planting.

Dairy farmers in the area plant corn and soy using treated seeds, which are clearly the source of the pesticide, Giguere said. Tests found them in water flowing from pipes draining surrounding fields.

His department will continue water sampling in the area, while the state Department of Environmental Conservation plans a survey this summer to assess the impact on insects in the creek, especially the stonefly and caddisfly larvae on which trout feed, he said.

Beekeepers such as Conrad fear that widespread use of the pesticides will hurt more than aquatic insects: They’ll impact pollinators attracted to crops and flowering plants that absorb neonics coming from neighboring agricultural fields.

If it turns out that the pesticides are harming the environment, the 2019 law gives Giguere’s department new authority to regulate such infused seeds. That doesn’t seem likely anytime soon, however. He’s hoping the new Agricultural Innovation Board, whose creation legislators approved this year, will tackle the issue and make recommendations about best management practices.

Banning the seeds outright would harm farmers’ ability to grow enough food for the state’s dairy cows and could come with its own set of impacts.

“To account for not using neonicotinoids, they might have to plant upwards of 20, 25, 30 percent more acreage to get the same amount of silage,” Giguere said. Tilling up that much additional earth could send more phosphorus streaming into Lake Champlain at a time when the state is working hard to reduce pollution.

“We’re doing a balancing act with keeping our ag infrastructure sustainable, cleaning the lake of nutrients and trying to mitigate the effect of pesticides,” he said.

From Conrad’s perspective, beekeepers are on the losing end of that equation. While the number of hives in the state has remained steady at about 15,000 in recent years, the high rate of hive mortality means beekeepers have to work harder every year to replenish their colonies. Conrad lost 25 percent of his bees over the winter and said most of the beekeepers he knows suffered higher losses.

“If farmers were losing 30 to 40 percent of their cows every year, people would be screaming bloody murder,” he said.

Beekeepers are screaming, but Conrad worries no one is listening, in part because the small industry lacks the political clout of dairy farmers — and because the case against neonics is muddled by misinformation.

Study after study has shown that neonics not only kill bees directly, but very small doses can make them more susceptible to other diseases, including Varroa mite infestations and deformed wing virus, he said.

That makes it difficult to draw a straight line between neonics and hive decline, but the evidence is there, Conrad said. For example, Varroa mites were present in hives for decades but only exploded into deadly infestations after use of neonic-infused seeds became widespread, he noted.

Most concerning to Conrad is the systemic nature of the chemicals. In the past, pesticides could be applied when pollinators weren’t present, for example when it was cold or before and after blooms. When pesticides are infused throughout the plant, including the leaves and blossoms, bees are exposed whenever they gather pollen, he noted.

“Insects are the foundation of the food chain and of life on the planet. When the insects are gone, we’re in trouble,” Conrad said.

Andrew Munkres, president of the Vermont Beekeepers Association, said he would like seed dealers in the state to be required to carry non-neonic products; currently, they aren’t. Requiring that farmers show they need the pesticide-infused seed, as Canada does, would be another way to keep neonic use to a minimum, he said.

He likened the threats to bees — managed honeybees and the state’s 300-plus native species — to the mythological Four Horsemen of the Apocalypse.

“Toxic pesticides are one of the horsemen, but they’re not the only one,” Munkres said.

The climate crisis has an impact on pollinators, as well, including when frequent droughts reduce the number of flowering plants. And how the agricultural landscape is managed makes a difference, too. Farmers today are cutting hay fields several times a season, which often doesn’t give plants time to flower, he said.

Back in Colchester, state apiculturist Decker gently dismantled and reassembled Roy’s hives, looking for clues. Nothing suggested to her that pesticides might be the culprit in this case. There were plenty of bees living in the second hive but few cells containing larvae, or bee brood. Perhaps, she said, the colony just needed some new blood.

She suggested that Roy buy a new, younger queen larva to replace what was likely an older queen losing her vigor.

“The new one will hatch, and they’ll just fight it out,” Decker told him.

UN adopts to start with resolution on eyesight, aims to help 1 billion 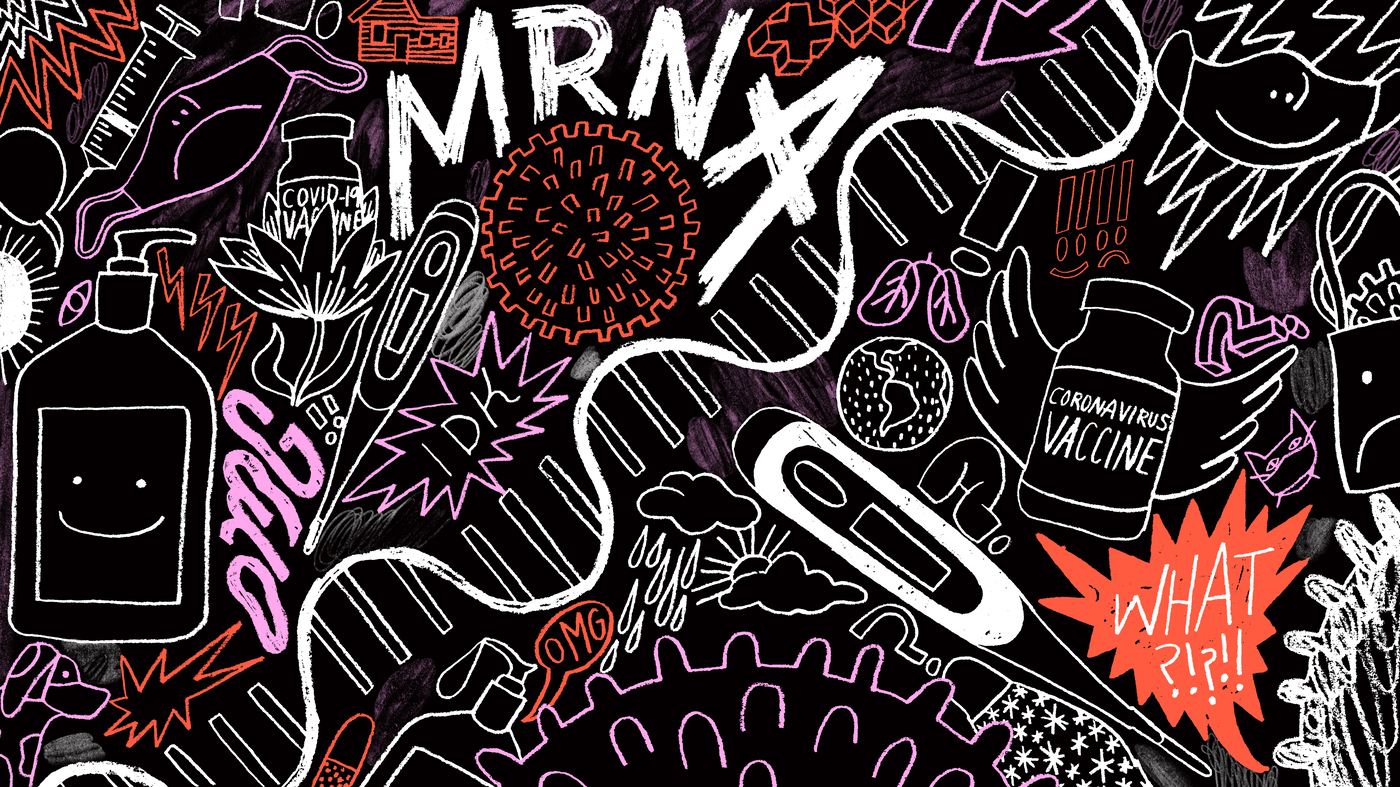 Teens And The Vaccine: Answers To Your Frequently Asked Questions : Shots

Your Information To Beauty, Meals, Health, And Eating regimen