I will shine a light in your face and make your acne magically disappear! Sounds weird right? Something a child would say to you rather than a dermatologist. But it comes to light (pardon the pun) that facial light therapy techniques really do work, even if they aren’t meant for us all. 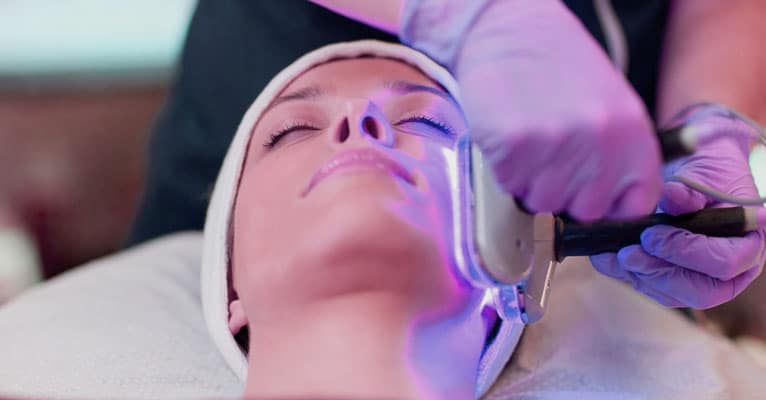 According to leading dermatologists, Light therapy is the new and upcoming way to treat acne.

It all started with NASA. NASA developed this technology in the early 1990s, to help plants grow in space. Later, with much research, they found that it can also be used to heal wounds. Because, there are not much options for astronauts in space, and wounds tend to heal less effectively in space, this technology proved to be essential for the people out there.

A little more research later, this technology found its way into the hands of dermatologists and cosmetologists for healing cosmetic procedure related wounds.

Since then, LED treatment has found its way into many a doctors’ hands. It is being used for certain types of cancers, chronic pain and even hair loss. In cosmetics, acne light therapy appears to have many uses.

THE RED PILL VS THE BLUE PILL

To understand the concept of using light to treat acne, let us first go through the process of acne spouting up on our skin to begin with. Your skin sometimes produces a lot of sebum, which is an oil like substance. Bacteria and other environmental pollutants that you regularly come in contact with, are stuck in that oil and all these things combine to clog the pores. Hence, your everyday whiteheads or blackheads are formed. When the follicle wall is damaged, this compound of oil, bacteria and other junk pours out causing redness. That brings immediate response from your immune system that unleashes microorganisms to fight off that bacteria. Hence, the irritation, inflammation and pain.

Red light appears to decrease the reaction of your immune system, namely the swelling, pain and redness. The blue light tends to fight the bacteria that is originally to blame for all these symptoms.

Whether you’re at the doctor’s office, or using a blue light skin treatment kit at home, the light is placed on or near the skin area which is affected. The time duration can be anything from 10 to 30 minutes. Using the assistance of infrared light, the red and blue light infiltrate into the effected tissue and enhance the process in the cell. The combination of these two lights results in younger, more youthful, sturdier skin.

Research also promotes the use of red light to reduce the formation of wrinkles. A study conducted found that the patients had 81 percent reduction in zits and another research found 78 percent overall improvements in the subjects.

The beauty of it all is that it doesn’t cause any harm as it doesn’t contain any kind of UV light. There are no serious side effects. There’s no skin damage involved. Several people who’ve reviewed these products used this time to meditate, which is an additional bonus.

MAY THE FORCE BE WITH YOU

The title says it all. No need to explain it any further. Get one of these gadgets and treat your acne at home, while you meditate.