Two ‘healthy and happy’ American sisters who died of assisted suicide in Switzerland were helped by a third person who texted friends while posing as them, it is claimed.

Lila Ammouri, a 54 year-old palliative care doctor, and Susan Frazier, a 49 year-old nurse, traveled to Basel, Switzerland on February 3, from their home in Phoenix, with the U.S. Consulate confirming their deaths on February 18.

The city is home to Pegasos, an assisted suicide facility which helps patients who aren’t terminally-ill to take their own lives for an $11,000 fee.

Dr. David Bilgari, a longtime friend of the sisters, said no one had heard from the duo since February 9, four days after they arrived in Switzerland, and that some of their final texts seemed to have been sent by someone else.

Prior to that, Bilgari told Fox 10 that co-workers had been texting them and felt that the person responding was not actually one of the sisters.

‘Some of the text communications they had, we are certain they were not from them,’ Biglari said. ‘They were most likely fabricated with someone else.’

A spokesman for the Basel-Landschaft Public Prosecutor’s Office confirmed to  The Independent that the sisters had died by suicide ‘within the legal framework’.

It is unclear how or where the sisters’ died. Assisted suicide is legal in Switzerland, with Basel being home to a assisted suicide organization called Pegasos, which offers help with associated suicides to people who are not terminally-ill, as long as they are over the age of 18. 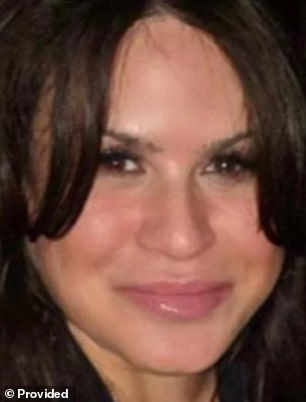 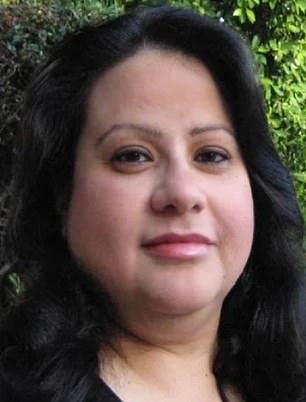 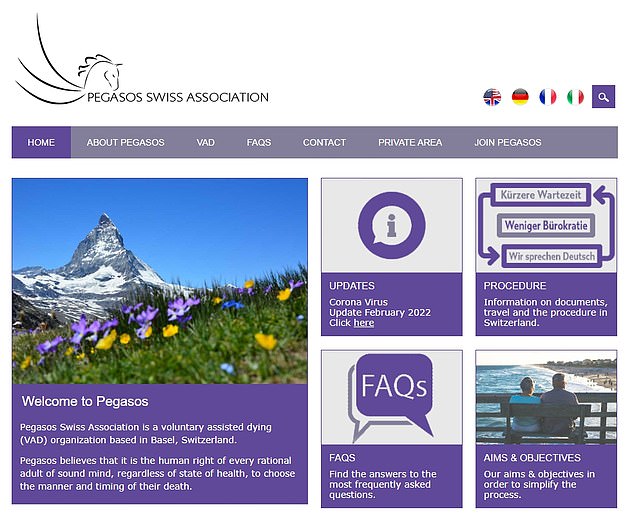 Basel is home to an assisted suicide service called Pegasos, whose website is pictured.  Unlike the more famous Dignitas clinic, patients do not have to be terminally-ill or severely disabled to end their lives there

According to Pegasos, anyone who uses their services must have a third party who is known to the individual be able available to identify them to the authorities after they die.

If the sisters did use Pegasos service, it is unknow who would have been with them to identify them.

Their brother Cal Ammouri, 60, who spoke shortly with his sisters before their trip did not mention that they were traveling with anyone else.

Frazier’s employer, Aetna Health in Phoenix, raised the alarm after she failed to return to work on February 15.

Cal says his siblings appeared healthy and happy, and has not given any indication as to whether they were suffering any illness that could have driven them to suicide.

Pegasos says it accepts applications from patients the world over, but insists it refers anyone who is suffering from depression to counselling services.

Its website states: ‘Pegasos believes that for a person to be in the headspace of considering ending their lives, their quality of life must be qualitatively poor.

‘Pegasos accepts that some people who are not technically ‘sick’ may want to apply for a VAD. But this does not mean the person is ‘well’. (Assisted suicide patient) Professor David Goodall was one of these people.

‘He was not sick but his eye sight was failing him, as was his mobility. Old age is rarely kind. The decision to end one’s life is an intensely personal one. Pegasos makes every effort to understand fully the unique circumstances of everyone who makes contact with us.’

Dignitas is the most famous suicide clinic, but is based in a different Canton (county) to where the sisters took their lives. It only offers an $8,000 assisted suicide to people who are terminally-ill, or who live with a disability that severely limits their quality of life.

The U.S. Consulate in Switzerland did not immediately respond to DailyMail.com’s request for comment. 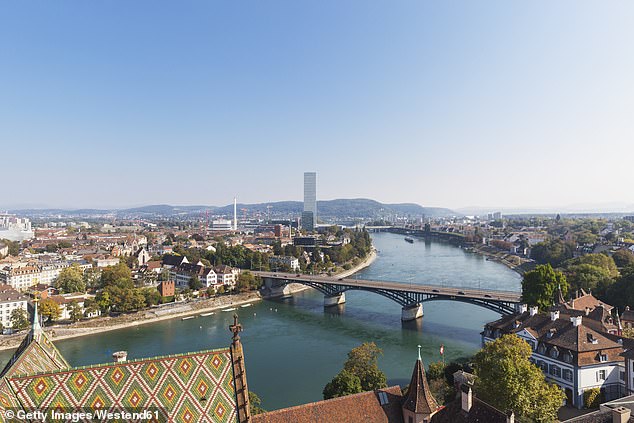 The sisters were found dead in Basel, Switzerland, (pictured) on February 18, three days after they were due back to return to work in Arizona

It is currently unknown which assisted suicide service the sisters used, but Pegasos, a nonprofit in the field, has a facility in Basel (pictured)

Other clinics across Switzerland also offer similar services, with patients given a solution of barbiturates dissolved in water, which guarantees a painless death after being consumed.

Visitors to the clinics must undergo stringent checks before being allowed to avail of their services.

Pegasos, in particular, which has English speakers on staff, requires looking for assisted suicides to be members of the organizations and pay fees that exceed $11,000.

Pegasos has no required waiting period for assisted suicide but does require consultations and paperwork be completed first.

Patients are given the option of intravenous infusion or a small drink that provide a lethal overdose that will lull them to sleep and result in death.

Cal, of New York, said is unclear why his sisters chose to end their lives, and that U.S. consular services have kept him in the dark.

‘This is the most terrible thing that’s ever happened to me,’ Cal told DailyMail.com ‘ I’m an only child now. I don’t understand any of it.’

Suicide is legal at Switzerland’s famous Dignitas clinic, with visitors required to undergo a series of checks before being allowed to end their lives.

According to Cal and long-time friends of the women, the sisters were do back at work at Aetna Health Insurance on February 15 but never showed up.

The grieving brother said that both sisters appeared happy, with Lila owning a home in Phoenix and enjoying her job helping patients with serious illnesses and pain and Susan recently getting a promotion.

‘Why would you leave your jobs, your home, your loved ones, just abandon everything,’ Cal asked. ‘I just want some answers.’

Michael Lutz, a spokesperson for the Basel-Landschaft Public Prosecutor’s Office, told The Independent that the sisters death did not immediately result in a criminal investigation since it was strictly performed through legal means.

The Phoenix Police Department, who were contacted by friends and family to investigate the incident, said they could not open a case since it was outside their jurisdiction.

The sister’s death was confirmed by the U.S. Consulate in Switzerland on February 18, weeks after friends and loved ones took to the Internet to spread awareness over their disappearance.

Like Cal, Bilgari mentioned that both sisters were happy and it was not like them to suddenly go missing.

Bilgari did not immediately respond to DailyMail.com’s request for comment.

Assisted suicide is legal in Switzerland

In Switzerland, it is legal to provide an individual the means to commit suicide as long as the reason is not ‘based on self-interest.’

According to Swissinfo.ch, around 1,300 people died by assisted suicide in Switzerland in 2020. Prior to the pandemic, about half those were from oversees, the majority came from Germany and the UK.

The process is primarily carried out with the assistance of Dignitas and Exit, the two largest assisted suicide organizations in the country.

Dignitas, the larger of the two, was founded in 1998 and requires those wishing to end their life perform two consultations with the group and an independent doctor, with rival services enforcing similar safeguards.

Dignitas only accepts patients who are terminally-ill or suffer from severe disabilities, but Pegasos, another assisted suicide provider, says it accepts applications from people who are not dying.

According to Dignitas, the individual is reminded multiple times throughout the process that they can stop, including up to the moment they are provided with a lethal drug cocktail to take their own lives.

A signed affidavit is also produced as a show of proof that the suicide was conducted without malice, coercion or any other outside force, as per the country’s law.

The primary form of death through Dignitas is by an oral dose of a sedative drug, followed by a dose of another sedative which would kill the patient already dulled to sleep by the first drug.

After consultations, legal paper work and registry expenses, Dignitas services can cost around $8,000.

The services for Pegasos, on the other hand, costs more than $11,000 and has no required waiting period for assisted suicide but does require consultations and paperwork to be completed first.

Patients are given the option of intravenous infusion or a small drink that provide a lethal overdose that will lull them to sleep and result in death.

In the U.S. assisted suicide is only legal in California, Colorado, Oregon, Vermont, New Mexico, Maine, New Jersey, Hawaii, Washington and Washington D.C. if an individual has a terminal illness with a prognosis of six months or less to live.

In 2020, Colorado reported 188 prescriptions for aid-in-dying medications, with Oregon reporting that of the 2,895 prescriptions given out in the state that year, 1,905 were taken.

Washington state reported in 2019 that the state had written 1,668 prescriptions for assisted suicide in the last decade, of which 1,622 people went through with the process.

In the UK, under the Suicide Act 1961, anyone helping or encouraging someone to take their own life in England or Wales can be prosecuted and jailed for up to 14 years if found guilty of an offence.

Section two of the act states that a person commits an offence if they carry out an act capable of encouraging or assisting the suicide or attempted suicide of another person, and the act was intended to encourage or assist suicide or an attempt at suicide.

Opposition to changing the law has come from faith groups, campaigners who say disabled people may feel pressured to end their lives and campaigners who fear assisted dying would become a business.

The Campaign for Dignity in Dying, an anti-Dignitas group, estimates that nearly 350 Britons have died through Dignitas.

How To Live A Healthy Lifestyle And Enjoy Life

The Best Paid Jobs in the Healthcare Industry

Attract Patients to Your Physical Therapy Practice by Public Speaking

How to Get Sponsorship Deals for Your Events and Projects

Why Weight Loss Fails and What to Do About It